I am honored and excited to participate in the YUMA Symposium 2018 as one of the presenters.
My artistic journey started from a fascination with machine and has been an exploration of mechanism for its purely minimal form and vitality from interactive movements.
In my main kinetic work series “Wings,” I place a pair of feathers on the tip of the finger or on the top of a metronome pendulum. The feathers are devised to flap as the wearer bends the finger or the metronome ticks. Mechanically constrained, fragile feathered wings come to life and resonate with wearers and viewers. They are intriguing and whimsical, yet evoke sympathy as if holding a fragile life in your hand or reflecting on a life in the mechanized world.
The presentation will also include other projects including collaboration with costume designers for television shows in Korea, for which I created various metal props. Also, I will share how digital processes have evolved my design and studio practices. 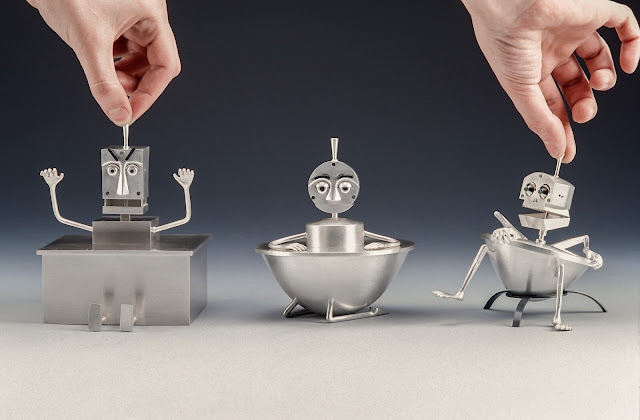 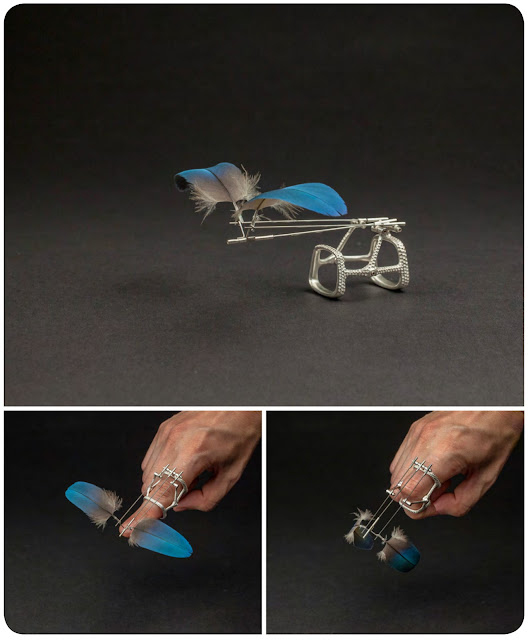 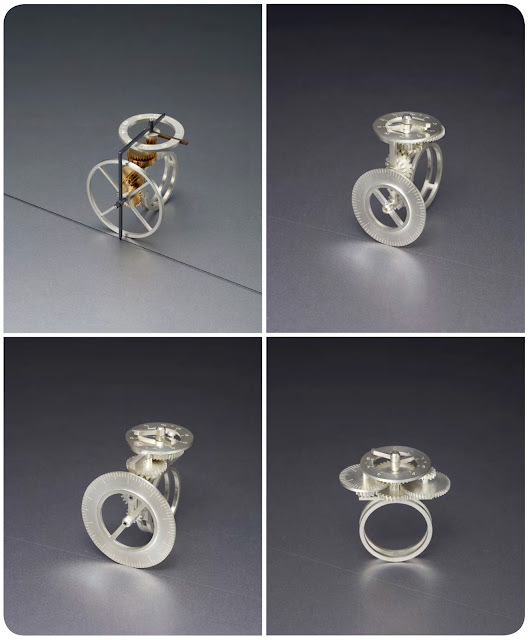 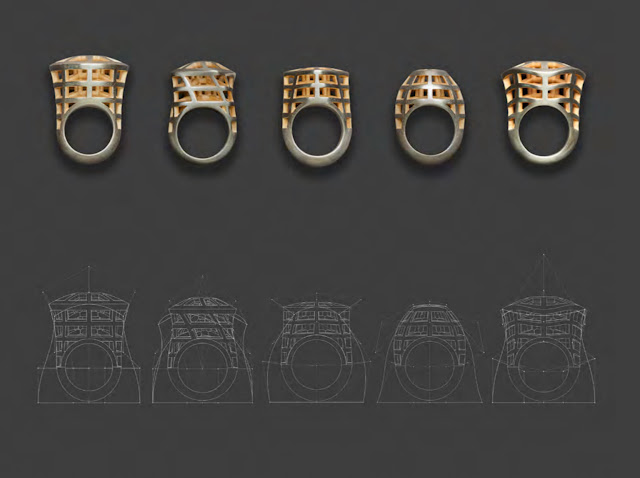 Hard Luck and hard Candy is the name of …the game.  Shoot.  Bang.  In essence this is a reflection upon my station in the American Dreaming.  Right here right now. Maybe I should wake up.  When I made the proposal a year ago I may have stepped in it.  Did I exercise any wisdom or foresight?  Actions and reactions.  What seemed like a good idea at the time has become:  The All American City Kid Passes Judgment.  The two definitions for judgment offer a whole lot of ground that should be organized could be covered.


Judgment –
·       the ability to make considered decisions or come to sensible conclusions:"an error of judgment"synonyms:discernment, acumen, shrewdness, astuteness, sense, ... more
·       misfortune or calamity viewed as a divine punishment:"the crash had been a judgment on the parents for wickedness"
Make enough sense to keep filling a leaking glass (metaphorically speaking…a dog that needs to be walked/a lawn that needs to be mowed/another teachable preachable moment in time) ALL THE WAY TO OVERFLOWING in a sea of mixed messages and multicultural…madness would be alliterative but impolite…mayhem, same…REALITY is the name of this game.  I am taking aim at some challenges and art heroes in order to balance my checkbook and manufacture harmony with disharmony with additional efforts to fuse the political furor and energy of early Peter Saul with the classic form follows function of Mingei-sotaed/functional pots of Warren Mackenzie.
Who and What, as far as standard operating procedure goes:
Peter Saul:  The ICE BOX!  A container for politics filtered through psychology or is it the other way around?
Warren Mackenzie:  The unabashed/unassuming or solid straightforward all pot all day/any time is function time with eight glazes, stoneware and gas fired reduction.
Chris Leonard:  The cat, the dog (particularly the Fu Manchued Fomo), Santa Claus (with a cigarette), The Jimbird, a Large Lunker or two in and on clay/canvas/paper with a general sense of careening out of control in some sort of hodge podge collage.

Living in a border region here in Texas’ Rio Grande Valley in the All American City of McAllen in the now/the troubled times of the early twentieth century I find both great similarities and also some distracting differences when compared to my native Midwestern home base of Ankeny/and the nine time All American City of Des Moines, Iowa (We are in the lower Midwest here in the RGV says me), I am a slow singles hitter that may have developed a taste for the home run. Several fellow artists within my geographical region and circle of influence insist that art must be engaged in political commentary specific to our current time and place or it all falls apart into decorative fluff stuff that may as well have been shaped by and in Denton or Des Moines or Detroit…Let’s go!
Two artists spoke of the border region in Texas during very well presented talks last year.  Photographers Liz Cohen with  Canals, Cars, Bikinis and Rags and Colin Blakely’s Disrupted Views tied their work and ideas to the open space and natural beauty of the Big Bend region way the heck up the river about 700 miles from us down at the tip of Texas where the Rio Grande empties into the Gulf of Mexico.  I hoped to find some romance, sweet or bittersweet, here, too in the lower Rio Grande Valley.  Cohen, who does a variety of complex combinations through “work that is interdisciplinary, bringing together inquiry in women’s studies, literature, poetry, and auto mechanics as well as expertise in documentary photography”.  Cohen’s  documentation of the creation process  in making an  effectively powerful and attractively cool 1973  El Camino-ish ride from an economically inefficient economy oriented 1987 East German Trabant was several flavors of amazing.  Promising much and delivering….what?  Who has that much time and money and hard working get up and go?  Why would anyone try to combine a low rider with a bare bones beast of burden?  Why would anybody wish to see what happens when you put peanut butter on your grilled cheese or mix the excess of Peter Saul with the restrained of Warren Mackenzie?  Will it taste good or be a bitter lesson?  I already drive a 99 Tacoma which has the muscle, economy, and promised effectiveness of both the El Camino and Trabant, though it is not particularly cool.  Or is it?   I just drove it off the lot almost twelve years ago, made forty eight painful payments of $325.00 and now need to quit dreaming and make purposeful art, not reposition my skills in the creation of that segment of the four wheeled American Dream.  I can’t fit into a bikini and the car culture attraction seems to blink in and out intermittently of my psyche but what a transformative concept.   And transformation is part of my American Dream.  Dreaming is a big part of what I do, but what exactly will I do?  Blakely didn’t step into social commentary, he escaped into the majesty of nature, another type of transformational force.  Ramping up the documentation of these forces beyond our control, he tied his work and ideas to painters with Photoshop enhancement skills, Albert  Bierstadt and Thomas Cole.  Drama!  Nature does directly tie to beauty and majesty, and if we tie into the American Spirit shouldn’t we take a bite or two out of that apple AND TRY TO CONTROL or USE the forces of nature  FOR GROWTH OR PROFIT because we can?  What is the purpose of social commentary?  What can it do? Pleasure seems to have to take a back seat while serious art provides more than encouragement to…act…escape…think…all of the above…Do I need a mission statement?  What would/will the end result be?  Where can I fit in and what visuals, functionally useful or not, accomplish the most in the short or long run?
To summarize the rambling rumbling in my brain and varied creations I am involved with right about now:  My value to the institution where I am employed to teach several variations of art (appreciation in addition to some ceramic action, where by definition APPRECIATION means to EVALUATE something FAVORABLY) has me present art based upon specific roles/platforms that the artist fills for which I have crafted the following mnemonic device:  World Record For Valentine…Artists allow us to SEE the WORLD as the artist sees it/See the world through others’ eyes.  Artists RECORD people, places and events from the artist’s time.  Artists make FUNCTIONAL items more pleasurable and meaningful and in turn make life more pleasurable and meaningful.  Artists give VISIBLE FORM to the immaterial---feelings, the spiritual/metaphysical realm, and universal truths (whatever they might be because that stuff always seems to be shape shifting and fairly fluid, possible controlled by those in POWER!)  So I’m going to Power through with Plan A, stick stuff together in pursuit of a dream like state and that is to make a set of bodacious bottles that borrow and blend each of these roles.  We should see collaged conglomerations with lots of peanut butter and cheese and hard luck and hard candy.  These bottles, though perforated, shouldn’t be empty; in fact, they can fill you up with what you NEED.  And if that lines up with what you WANT, so be it….

Part 2.
Until the Twelfth of Never Man (XOLOYOLO) 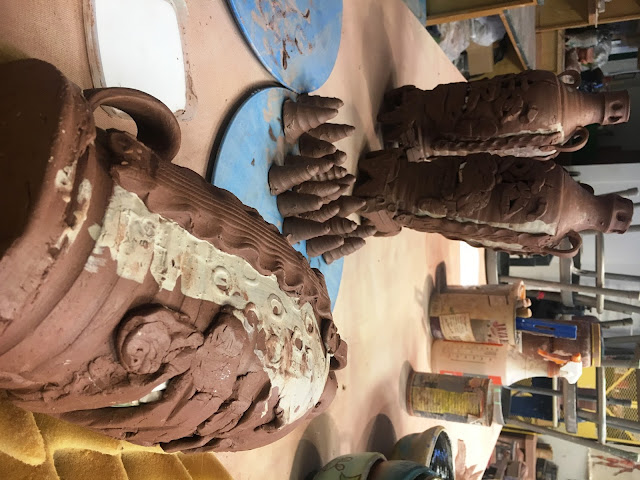 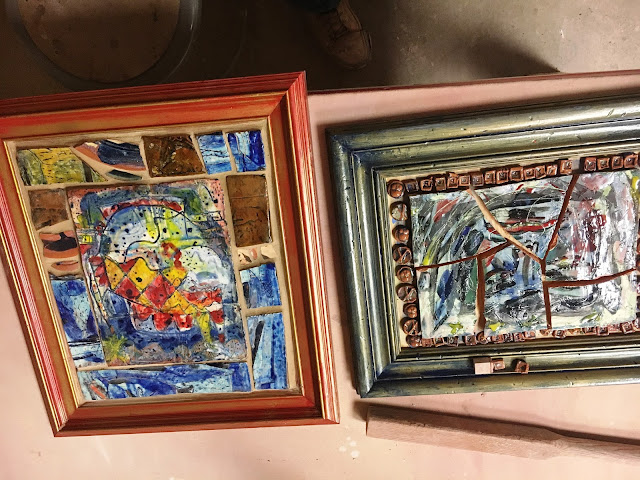 Parts 3 and 4 ---With a little eye candy for the wall, too, fragments that have not been stitched together, they’ve been cemented into thrift store frames…I want it all but will most likely need to choose between… 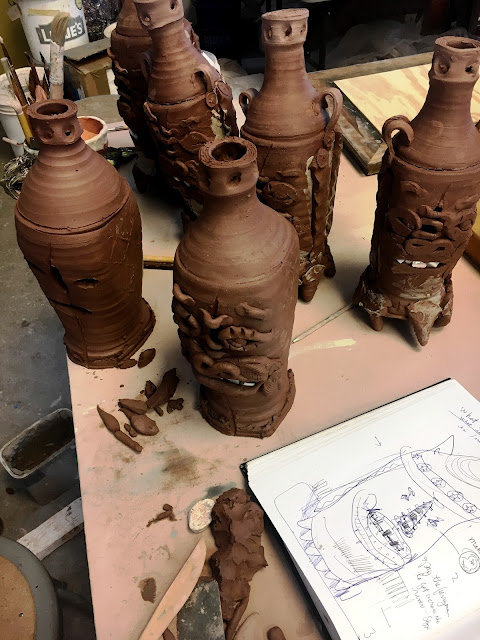 (Not in My) Backyard Blues A
Moody Blue
How Now Brown Meow (Cat on a Hot Tile Roof/And he ain’t coming down soon.)
Tell Me Am I Getting Thru 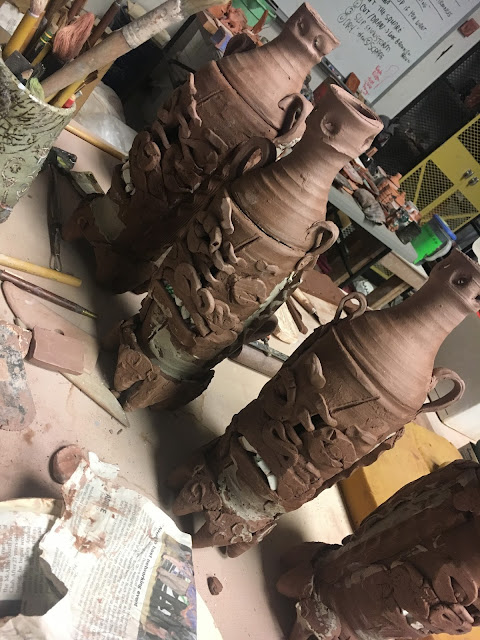